The EEPLIANT2 Layman’s Report with the final project results and impacts is now published!

For 30 months (from September 2017 to February 2020), 17 Market Surveillance Authorities (MSAs),1 energy agency from 15 European countries and PROSAFE worked jointly under the Energy Efficiency Compliant Products 2 (EEPLIANT2) Action to improve the compliance of Household Refrigerating Appliances, Network Standby Appliances, and Professional Refrigerating Storage Cabinets with the European Union's energy labelling and eco-design requirements (according to the Ecodesign Directive 2009/125/EC and the Energy labelling Directive 2010/30/EU, repealed in 2017 and replaced by Regulation (EU) 2017/1369).
The project was coordinated by PROSAFE and has received funding from the European Union’s (EU) Horizon 2020 research and innovation programme under grant agreement No 752591. 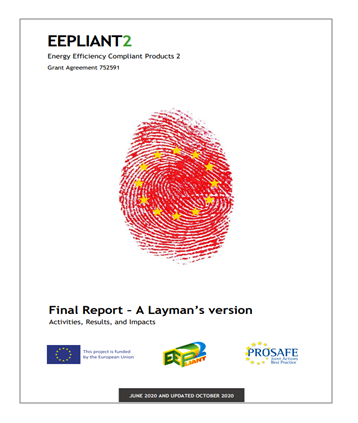 To mark the end of EEPLIANT2 and to inform the EU consumers about the multiple benefits generated by it, we have prepared and published a Layman’s Report. The report highlights the activities undertaken, the best practices adopted by the participating authorities, the final results of the product inspections and testing, and the real-life contribution of the project as regards the benefits created for the environment, the EU consumers and for ensuring a level-playing field for the industry. In total, EEPLIANT2 checked 393 products and tested 111 models, discovering levels of non-compliance higher than expected across all three product sectors that were inspected. The final results show that the project has generated big impacts that help reduce our environmental footprint in the areas concerned - in line with the objectives of the European Green Deal and the Green transition strategy - and also significant energy savings for the EU consumers.

More precisely, the value of the potential energy saved through increasing market surveillance joint actions far outweighs the cost of the market surveillance campaigns. For example, it is estimated that the EEPLIANT2 domestic refrigeration activity alone would by 2030 result in energy savings of 369 GWh counting to €75.6 million. Conversely, the costs of repeating this activity on a bi-annual basis for the next 10 years would not exceed € 5 million. Find out how EEPLIANT2 made a difference in the Single Market by checking the Layman’s Report of EEPLIANT2.

Learn more about the EEPLIANT2 Joint Action and the follow-up EEPLIANT3 Concerted Action at www.eepliant.

PROSAFE is launching a Call for Tender for the EU-funded Joint Market Surveillance Action on Harmonised Products (JAHARP2018) concerning a specific product group covered under WorkPackage3 - Portable Room Heaters.
PROSAFE is seeking accredited, independent laboratories located within the EEA with experience of testing a specific product group using EU standards.
In particular, the tender covers the state of compliance and safety under WP3 – Portable Room Heaters as subject to the Low Voltage Directive (LVD, Directive 2014/35/EU).

More details concerning the tender requirements can be found in the Official Call, Price List and the General Conditions.

Disclaimer: The content of this webpage represents the views of the author only and it is his/her sole responsibility; it cannot be considered to reflect the views of the European Commission and/or the Consumers, Health, Agriculture and Food Executive Agency and/or the Executive Agency for Small and Medium-sized Enterprises (EASME) or any other body of the European Union. The European Commission and the Agency do not accept any responsibility for use that may be made of the information it contains.