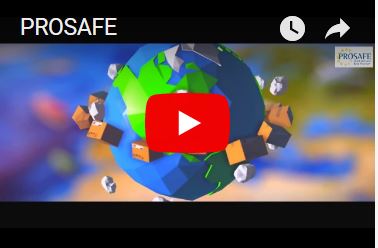 PROSAFE (Product Safety Forum of Europe) is a non-profit professional organisation for market surveillance authorities and officers from throughout the EEA. Its primary objective is to improve the safety of users of products and services in Europe.

As from 2006, PROSAFE has taken the initiative to coordinate a number of Joint Actions between various market surveillance organisations within the EEA (European Economic Area), which are (co-)funded by the EU Commission.

PROSAFE has been established by market surveillance officers from various countries throughout Europe. The first meeting of the group was held in 1990. Since then, most EU and EFTA countries have been represented at meetings together with various other accession, candidate and potential candidate countries from different parts of Europe. In order to ensure a high level of transparency, the EU Commission and EFTA Secretariat have standing invitations to meetings and workshops.

Over the last years, interest in PROSAFE has also expanded overseas and PROSAFE has become an active member of the ICPSC (International Consumer Product Safety Caucus).

To enhance cooperation between market surveillance authorities and their officers in order to improve safety and compliance of products and product related services.

The primary objective of PROSAFE is to contribute to the safety of users of products and  product related services, and to compliance with the EU legislation.
The secondary objective is to ensure that PROSAFE is recognised as the organisation of choice to support effective market surveillance in general, by promoting informal discussion, cross border cooperation between Market Surveillance Authorities and their officers, and e.g. by designing, promoting and coordinating Joint Market Surveillance Actions.

In this regard, PROSAFE aims to:

PROSAFE General Assembly meetings (more commonly known as PROSAFE Meetings) are usually held twice every year in one of the EEA countries. These meetings serve to discuss various issues of European market surveillance, in particular, in relation to specific product safety problems found during the last six months by the participating market surveillance organisations.

Since 2005, PROSAFE has embarked on various projects. Of particular importance were the EU funded EMARS I and II (Enhancing Market Surveillance through Best Practice) Joint Action projects. Various other EU funded (product specific) projects are also being led and coordinated by PROSAFE. More information about all the projects can be found by entering into the Joint Actions menu.

The PROSAFE Charter contains the guiding principles for this organisation and its members. At the PROSAFE General Assembly Meeting in May 2016, held in Ljubljana, Slovenia, the draft Charter has been agreed upon by all members.